After the highly successful aSpIrM-2 main mission flown by Starmam, tension was climaxing. The following test launch was the riskiest and boldest one we had done so far. Boltonov had spent months in preparation of equipment and software. As custodian of OS 1, he first had to refurbish the rocket after the bruises it acquired in February.

His vision of taking aSpIrM to the next level was to go full-blast electronics to collect telemetry, data and footage from the flight. Therefore his rocket, named Not Without My Handbag (NWMHB) after a remarkably bizarre Aardman short, had to undergo a series of modifications:

Boltonov designed and manufactured an awesome fairing that would open at apogee and release the payload. Therefore he needed to be able to detect apogee with an altimeter and some neat software. On top of the opening mechanism sat a camera supposed to monitor the payload bay and the fairing deployment. It sent the images via downlink directly to the launch control panel on the ground. How awesome is that?!

The first stage was equipped with a super tiny camcorder tasked with bringing home beautiful images from the flight. (We have always wanted to know how we look from above). The whole shebang put a lot of additional weight on the rocket. So one of our main concerns was whether NWMHB would even leave the launch pad. Fully dressed, she weighed nearly 500 grams and we only have D-class motors! Forget lipstick: Here’s a glimpse of what’s in a  🚀 handbag 😉 (Mouse-over for description):

Boltonov calculated the initial thrust to weight ratio. With five times more thrust than weight, she should be able to lift up easily. The question remained: Will NWMHB gain enough speed to successfully stabilize the rocket as thrust lowers to only 9N after just 500 milliseconds into the flight.

So tension was building and we all couldn’t wait to see what would happen when our wonderful Flight Director Huber Pom ♬ pushed the button ♬ for ignition. NWMHB didn’t idle on the pad at all, she had a perfect lift-off and stabilized beautifully. Boltonov was elated when he got the first images from the fairing on his control panel and soon saw his fairing open and release some crazy little payload creatures. You will learn more about the payload in our upcoming webcast. Stay tuned! 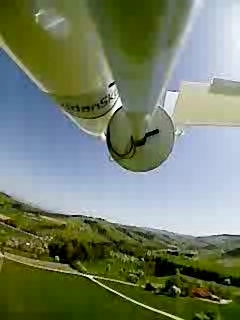 Scenic view from the fairing camera

So far, so good. But there was a problem with the parachute, the shock cord was burnt at the lower end, so the first stage took a heavy hit on impact and cannot easily be repaired. Yet the parachute carried the second stage with the gorgeous name Hedy Lamarr safely to the ground and all the electronic equipment could be safed. In case you are not familiar with Hedy Lamarr, consult your preferred search engine. You might be in for a stunning surprise!

The first stage camera unfortunately lost its SD card during the rather harsh landing. The impact force ejected the camera itself like a rocket: Rapid G-force changes seemed to unlock the SD card from its bay, vectoring it into the vast expanse of ankle-high grass at the beautiful Rimstead launch site. The chances to find the device carrying probably the greatest footage ever went down to a factor we are not able to display here. Which doesn’t mean we didn’t try.

Take a look at Hedy Lamarr with the open fairing halves and the parachute attached to it. You can see the opening mechanism of the fairing with the payload bay camera sitting on top of it: 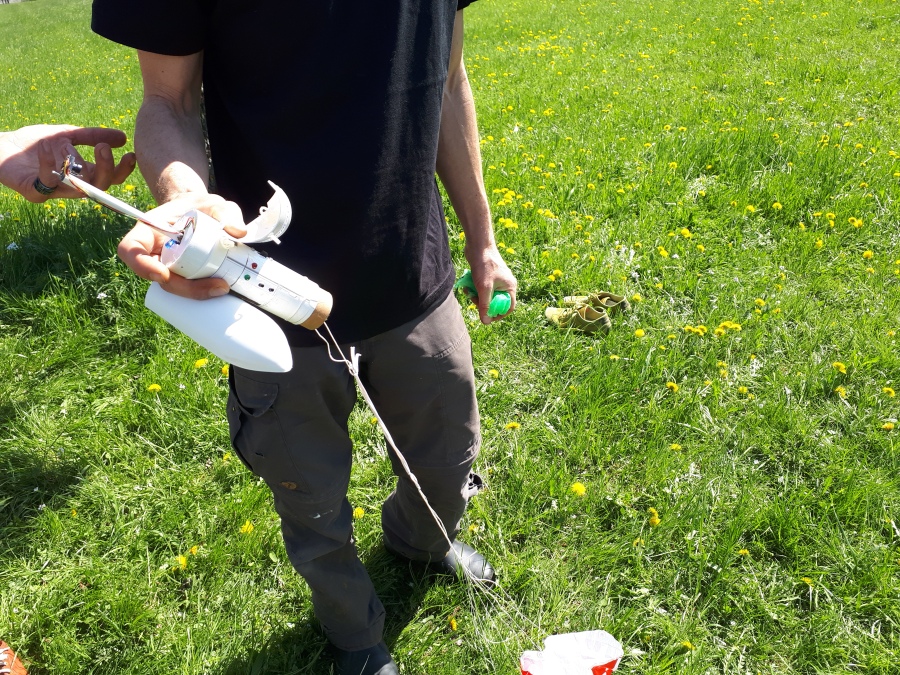 The altimeter had recorded an apogee of 48.4 meters at 3318 milliseconds into the flight and fairing opening at 46.9 meters at 3326 ms. Boltonov was more than happy about these results.

On second thought and after having a closer look at the data, the apogee seemed totally plausible. But the rest of the data should be considered – well, let’s say at the very, very, very low end of probability: 1.5 meters in 8 milliseconds would mean a speed of way more than 500 km per hour. Not very likely! The only explanation might be the magic worked by @IridiumBoss. But quite honestly, we think his ♬ kind of magic ♬ is calibrated more towards solid and realistic results rather than miracles. The more likely reasons are misread figures (the display was hard to read in the bright sunlight), misspoken figures (who doesn’t get confused in a state of excitement and joy), misheard or miswritten figures (Iridia scribbled down what she had heard from Boltonov’s shout-out) or a wrong reference in the code (Tien Huu will look into this).

So let’s watch the exciting flight of Not Without My Handbag:

This article will be updated.