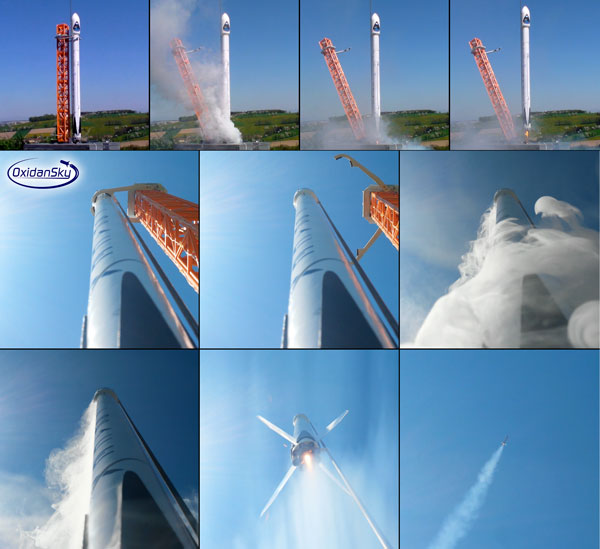 Next up on the pad after “Archie” was “Starmam”, our OS 2 that had already performed our aSpIrM-1 launch. 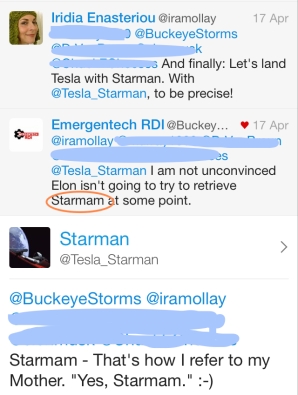 Before we dive into the details of the launch, here’s a quick throwback to how the name came about.

Iridia was joking on Twitter with some folks when @BuckeyeStorms made a typo, writing “Starmam” instead of “Starman”. @Tesla_Starman picked up on it, saying that this was how he referred to his mother. Which greatly amused Iridia.

At that time Iridia had the impression that “her” rocket (she is custodian of OS 2) was asking her to  ♬ “Call my name” ♬ and she was therefore wondering what the perfect name might be. Somehow Starmam immediately appealed to her.

After sleeping over it and getting the guys’ consent, Iridia decided that Starmam was the perfect nick for OS 2, printed out a label and stuck it on the rocket.

But back to aSpIrM-2: Just before it was Starmam’s turn to launch, “Archie” had had a parachute failure and got heavily bruised. This came quite unexptected, since the maiden flight of OS 3 was considered failsafe. Iridia felt quite concerned about that. She asked Cato Stroppo, the custodian of OS 3, who also happens to be OxidanSky’s Launch Disaster Analyst, for details about the problems with Archie. She got convinced that the parachutes tended to be the weak spot in too many launches. Further, to the disgruntlement of the team and the audience from the neighborhood, she started a discussion with Boltonov on motor choice for her launch.

Starmam was supposed to fly on a D9-0, mostly for lack of other options. Solid fuel motors are hard to come by in our country and there had been a shortage of supply before aSpIrM-2.  So Boltonov acquired whatever he could get hold of. SpaceX recommends D12-5 or E9-6. So our D9-0s are already very low thrust for the rather heavy vehicles. Due to the previous parachute problems, Iridia shied away from using a motor without a parachute delay. Despite social pressure building up for her to launch, Iridia reconsidered her priorities: Failure is okay for a test launch, but not for the main mission. Mission safety is the number one priority.

So Iridia went back to the workshop to perform some modifications on the recovery system, assisted by Cato: Instead of a knot she had used a trigger hook to connect the shroud lines of her chute with the shock cord and she wanted to reinforce the trigger hook and secure it.

Second priority was the previously undisclosed hosted payload. It was supposed to be deployed and visible. So ♬ flying high ♬ altitudes was not a goal. For all these reasons, Iridia decided to fly Starmam on a meager C6-3, wich was the only other option available. The result was worth the qualms and the waiting:

Starmam took off beautifully in an elegant cloud of smoke and reached apogee pretty soon. The chute deployed fine, the cords and trigger hook withstood the deployment shock and the hosted payload was released as planned. 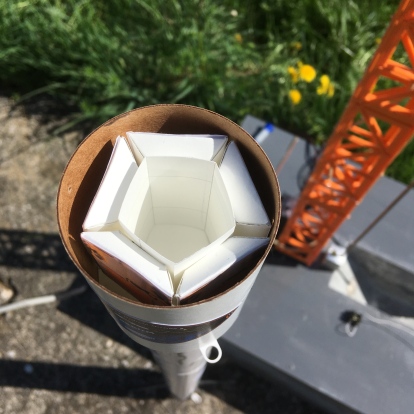 So what was it about? aSpIrM-2 was supposed to emulate the Iridium-6 launch, the rideshare of five IridiumNEXT satellites with GRACE-FO, Earth research satellites launched in a cooperation between NASA and a German research facility. Therefore aSpirM-2 flew five Iridia satellites and a hosted payload: Shiny Tiny Guy, a 3 cm icosahedron with a highly reflective surface. It had been inspired by RocketLab’s secretly launched Humanity Star. Which in turn had been inspired by the Iridium flares of the Block 1 satellites. @IridiumBoss Matt Desch had once called them “shiny little guys”. So Iridia thought this was a very appropriate name for her payload. She designed “Shiny Little Guy”, initially intending to put him into the payload bay of Starmam, but later changed her mind: This would have required to alter the staging configuration of Starmam and could potentially have put the Iridia satellites at risk of being shredded to pieces.

So Iridia decided to put the secret payload into the interstage and deploy it from there. But the diameter of the rocket body is smaller than that of the payload area and Shiny Little Guy was simply too big. A new device had to be built, and Iridia named it “Shiny Tiny Guy”.

In the video, you can beautifully see the stage separation and the parachute deploy. Then Starmam spits out all the wadding that had kept the chute safe from the heat of the deploy boost, and then … then the time has come for Shiny Tiny Guy ♬ to break free ♬, first dancing around the separated stages of Starmam, then descending on its own. It flares and blinks and glides through the sky in such a marvellous way! Just watch its ♬ stardance ♬:

This article will be updated and further footage added.